Lectures and seminars are offered at the Da Vinci School in the court room of the 800 year old former Court House and City Hall of the 6000 year old UNESCO classified town of Arbon, Switzerland and in the neighboring castle.

Arbon is an ancient and beautiful city on Lake Constance with a lake view and view of the Alps. It’s located at the crossroads of Europe, one hour away by car from the birthplace of commercial aviation, 2 hours away from the European and Swiss Patent Offices, and less than four hours away from the World Intellectual Property Organization in Geneva. The Zurich Airport is nearby, so it’s easily accessible internationally.

The town is also the home of the founder of the Da Vinci School, who lives in the old KuglerHouse, known throughout Asia as the symbol of Switzerland, thanks to the book on Swiss History by Rhie, Won-Bok, entitled “Far Countries, Neighboring Countries –Swiss”, published in 2008 by CITIC Publishing Group, China. 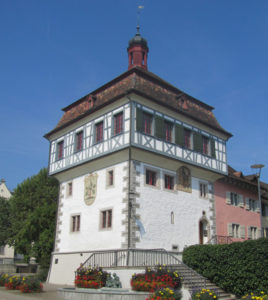